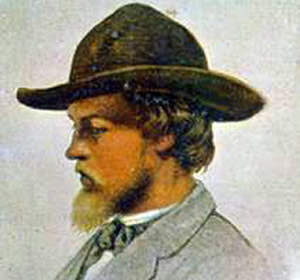 Some of the best insights into Burke’s character come from William Brahé, a 25-year-old German, formerly a skilful wagon driver on the goldfields. He wrote that Burke would ‘blaze up into a temper very quickly’ but soon get over it. He also experienced Burke’s change of mind and reversal of orders when he told Brahé to stay behind at Balranald but then took him on again. Later Burke promised Brahé a place in the party’s final push to the Gulf of Carpentaria but ended up promoting him head of the base camp instead.

There Brahé established a good routine and McDonough, Patten and Mahomet followed his orders faithfully. Once Brahé shot 40 rats when they came in plague proportions and had to hang their stores in trees, but he didn’t accept food from the local Aboriginal tribe and unfortunately scared them away on several occasions by firing over their heads. Time and time again this inability of all members of the exploration party to exploit the knowledge and skills of the Aboriginal people is unbelievable today.

With Patten extremely ill and signs of scurvy in two men, Brahé ‘rode out to search the horizon’ and seeing no sign of Burke’s party, buried a letter in a box with what rations they could spare, and before leaving ‘carved his famous instruction: “DIG 3FT. NW” and hacked out the date’ on the coolibah tree which was 21 April 1861.

After waiting a month and five days longer than Burke had ordered and no sign of Wright’s supply party, Brahé’s decision to leave was wise. Had he waited longer their rations would have been depleted, but most importantly Patten may have died and McDonough’s condition would have worsened. In May they met Wright’s team at Bulloo and soon Brahé convinced Wright to return with him to the ‘DIG’ tree in case by some miracle Burke and Wills had survived.

Unfortunately these two ‘didn’t notice the broken bottle on the top of the stockade, the rake leaning against the tree or the piece of leather cut out of the stockade door’ and rode back after fifteen minutes, not realising that three starving men were not far away. In July 1861 Alfred Howitt, taking Brahé with him, led the search party which rescued King. The following year Howitt went back to bring the remains of the explorers to Melbourne for a public funeral. So if Brahé accompanied him both times he had made four visits to the famous coolibah tree. 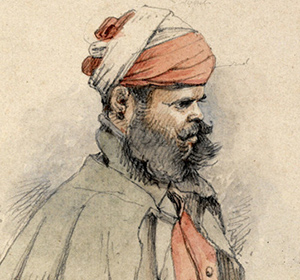 The portrait of Dost Mahomet by William Strutt shows how colourful and exotic the Afghan camel handler looked beside the other members of the expedition, with his bright turban, curly moustache and whiskers. He was a Muslim and did not speak English, but he could communicate with King. Landells wisely engaged them both when he went to India to buy the camels for the expedition. As with the other camel drivers, Mahomet was paid ‘less than a third of the wages of the other men’, but when in Brahé’s depot party he ‘was the major supplier of ducks and fish from the creek’.

After the Aboriginal people began pilfering some of their gear, Brahé ‘drew a circle in the dirt and indicated that no-one should cross the line’. He fired over their heads ‘to reinforce his point’ so they retreated but came back in body paint and waving spears. Mahomet was ‘trembling all over’ and was so frightened that after that he ‘refused to go out hunting at all’.

When one of the camels ‘lifted him off the ground with his teeth, shook him violently and let him drop’, Mahomet, later badly bitten by one of Mr Howitt’s camels, was permanently disabled. He was part of the Victorian Contingent Party and the Victorian Exploring Party under Howitt in 1861 and 1862. After the enquiry Mahomet was awarded two hundred pounds and went back to Menindee where he worked at William Ah Chee’s bakery, and died there in 1881.

William Patten was the one who ‘burst into tears and sobbed as Burke embraced each of his men’ on 16 December 1860 before leaving with Wills, King and Gray for their dash to the Gulf of Carpentaria. Burke was farewelling the four men who were to stay at Camp 65 and await their return. He took Patten ‘aside and reassured him’ kindly that if the gulf party ‘was not back in three months’ he should return with Brahé to the Darling as planned.

Patten was a blacksmith who had known Burke in Ireland and was chosen in Burke’s first pick from about three hundred applicants. When four months and five days had elapsed Brahé left a letter with some rations saying that Patten was ‘in a deplorable state’ suffering with an injured leg and showing signs of scurvy. Nevertheless Patten summoned the strength to shoe the horses before their departure and then submitted to leaving on a stretcher.

By May 1861 Brahé and his men came upon Wright’s party on their way at last, to supply Camp 65, so Patten came under Dr Beckler’s care. The good doctor was already caring for Smith and Belooch who had the same signs of advanced scurvy and beri-beri. Sadly Patten died on 6 June.

Thomas McDonough was another Irishman chosen as a labourer at the very start of the expedition like Patten. He was quick to defend his compatriots and at the Royal Commission accused Dr Beckler of not feeding Patten but allowing him to die. He also maintained that Wright was ‘very disorganised’ and had never intended to rescue Burke.

Early in the expedition McDonough was lost in the bush at Bilbarka on the Darling River with King, Hodgkinson and Dost Mahomet. They returned without finding the camels that had strayed but with a little more knowledge and respect for the Australian bush.

By the time they arrived at the Cooper basin Wills obviously trusted McDonough because he took him out on a thorough search for water over about 200 kilometres. They lost their camels and nearly died of thirst, but subsequently McDonough’s admiration for Wills’ determination to get them back safely, nearly matched his feelings for his beloved leader Burke.

At the base camp waiting for Wright to bring up supplies and for the gulf party to return, McDonough reliably followed Brahé’s routine orders. He was particularly noted for collecting firewood and boiling the billy. Also, devoted as he was to Burke, he proved to be exactly the kind of assistant Burke needed on this venture.