The Dig Tree Reserve visitor experience was upgraded in 2020 with a new boardwalk and signage, replicas of all six blazes and remedial work to the creek bank. The 4470 square metre fenced area contains the Dig Tree, the Face Tree and Brahe’s Tree.
Photo: Denver Beanland

The Royal Historical Society of Queensland (RHSQ) is Trustee of the Dig Tree Reserve. In 2020, the RHSQ upgraded the Dig Tree Reserve visitor experience with a new path, boardwalk and interpretive signage. A sculptor was commissioned to create replicas of the carved blazes several of which are no longer visible.

The Dig Tree Reserve site has had constant visitors since the 1860s following the deaths of Burke and Wills.

John Conrick, a pastoralist from Warrnambool in Victoria, had arrived in the area in 1871. He took up a property on Cooper Creek which became Nappa Merrie meaning sand hills in the local Aboriginal language. The Conrick family operated the property until the mid-1950s when they retired to Adelaide. In 1937 the family erected a plaque to the Conrick family highlighting their history as a pastoral family in the area. They had suggested at that time that the Dig Tree be preserved in a separate reserve. Negotiations progressed with The Royal Historical Society of Queensland and the state government and a one-acre reserve was established in 1964.

The Royal Historical Society of Queensland was made Trustee of the one-acre Dig Tree Reserve. This Reserve was gazetted on page 1083 in the Queensland Government Gazette dated 2 July 1964 covering about one acre.

Following a further survey in September 1985, on page 285 in the Queensland Government Gazette dated 24 January 1987, the following area was gazetted: R 7 being lot 1 on plan CPR4 an area of 4470 square metres in the Parish Oontoo, County Cooper, on the bank of Cooper Creek in south-west Queensland. The second gazettal was based on the survey by Paul A McDonald LS in September 1985.

On 22 January 2016, the Dig Tree Reserve was entered on the Australian Heritage Database under the title The Burke, Wills, King and Yandruwandha National Heritage Place which also includes Burke’s Tree, Wills’ Site, King’s Site and Howitt’s Site. The statement of significance says the sites have “outstanding heritage value to the nation as the setting for the key events associated with the Burke and Wills Expedition, which was a defining moment in Australia’s cultural history.” On 28 February 2003 Burke and Wills Dig Tree was entered on the Queensland Heritage Register which says: “The Dig Tree is a revered social landmark for many Australians.”

In 2020, the Dig Tree Reserve was refurbished with a path and boardwalk to protect the roots of the heritage-listed trees. Interpretive signage was installed with replicas of the carved blazes. The refurbishment project included remedial work to the waterway to protect the Dig Tree site from soil erosion.

The refurbishment project was undertaken by RHSQ and Bulloo Shire Council with the cooperation of Nappa Merrie Station. The project was funded by RHSQ, Bulloo Shire Council, the Commonwealth Government’s ‘Australian Heritage Grants Program’ and the Queensland Government’s Department of Environment and Science ‘Heritage Grants Program’, and Department of State Development ‘Building Our Regions Program’. 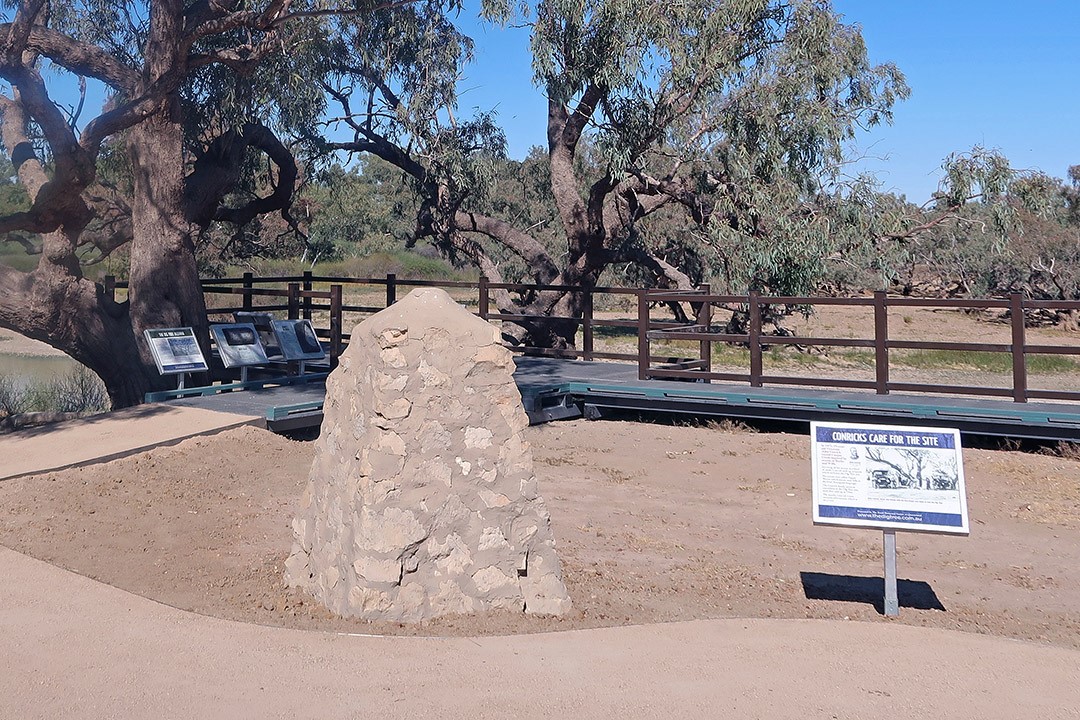 The white cairn was erected by the Conrick family in 1937.
Photo: Denver Beanland 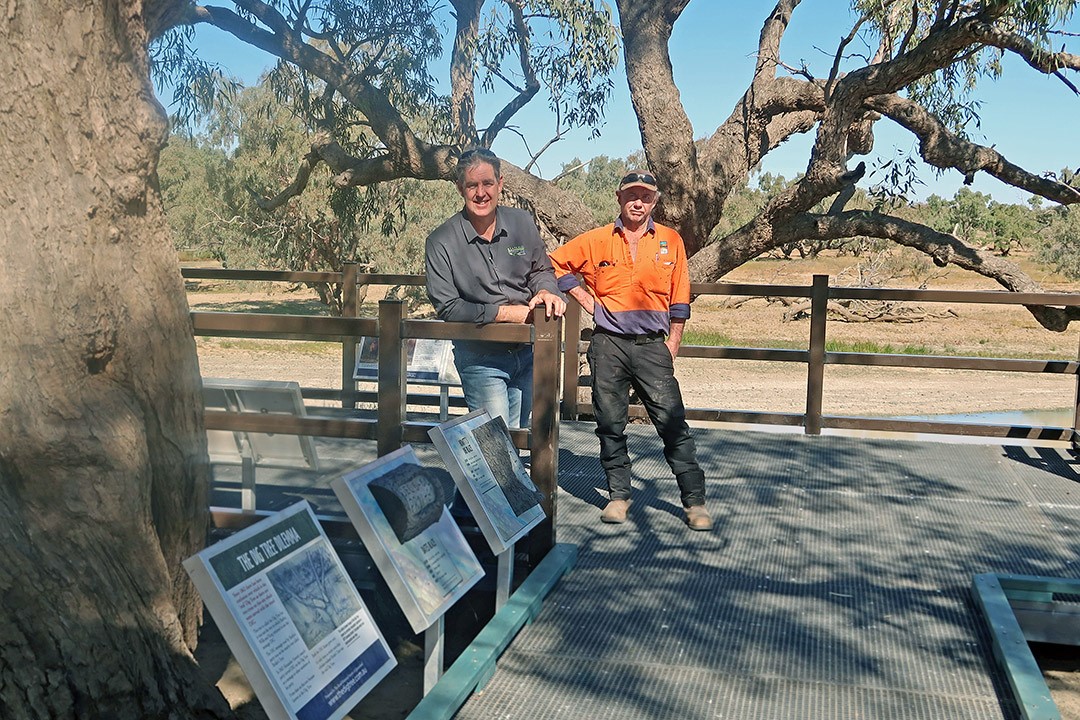 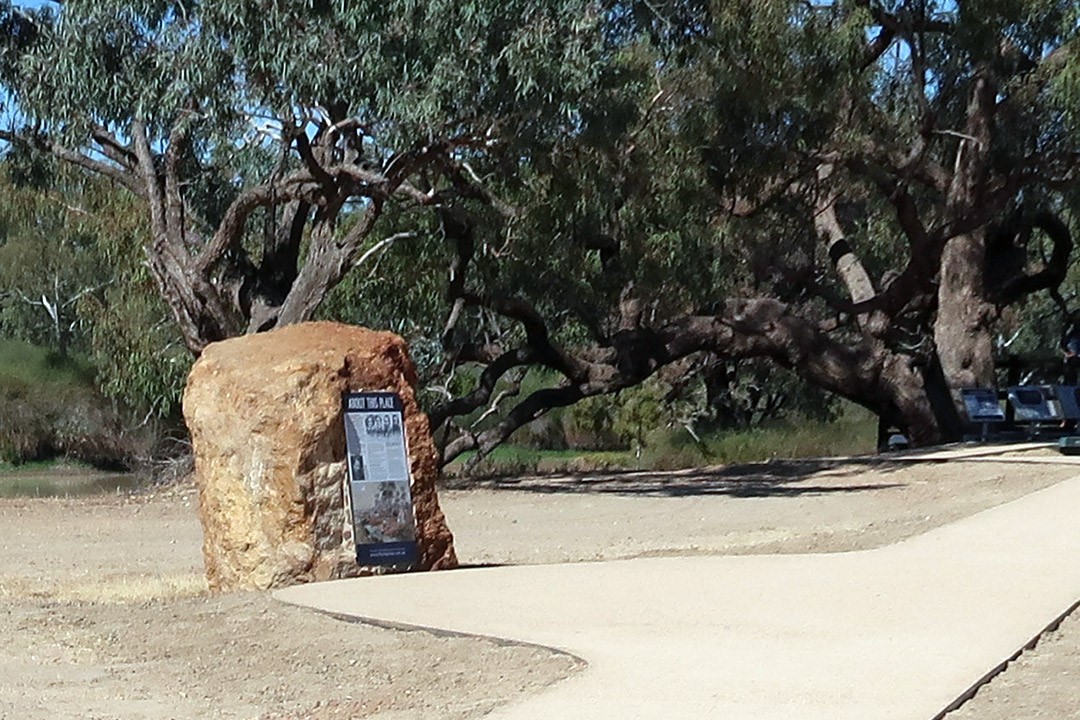 A stone cairn which was erected in 1997. Click here to read the text on the brown cairn.
Photo: Denver Beanland 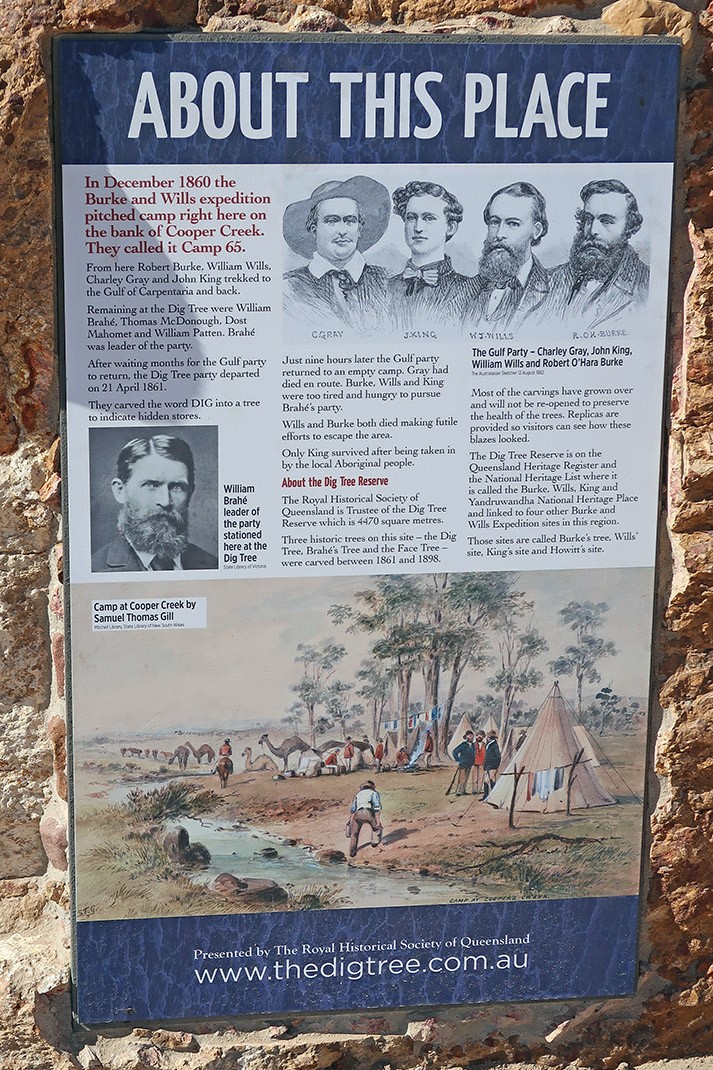 Interpretation board about the Dig Tree site.
Photo: Denver Beanland